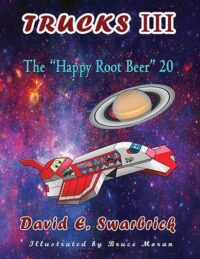 “Hey, hey, hey, Race Fans! This is Jeff Dale from our broadcast studios here on Earth! It’s that time again! Another race in the Fast Truck Series is about to take place! Can you feel the excitement in your bones? On this occasion we’re taking you all the way across the galaxy to a star system in the Orion constellation for the running of The “Happy Root Beer” 20! That’s right! Fast Truck has headed to a moon in orbit around the planet Wood Barrel! Filled entirely with an ocean of tasty, creamy, bubbly root beer, and surrounded by a wide; 15-mile around, flat, metallic ring system, the satellite host one of the wildest events to ever be held in truck racing! Once every season: popular, new teams, and general competitors put on magnetic tires and add pressure relief valves to their exhaust pipes. Crews strap oxygen tanks tight into their beds and they run a line from the tank to the trucks air intake, and they let it rip! For 20 laps around the moon! On the rings the trucks charge for 300 miles! Without pit stops; with only one large tank of gas, and another filled with air to make their engines fire, the trucks strongly roar and race in the cold hot vacuum of space! While having just one set of metal magnetic wheels to hold them firmly down to the track, they give it their all, run it hard, and charge to the front to be the one at the end to win the purse! I assure you it’s going to be an exciting event! So, come on! What are you waiting for? Climb in and see which truck takes home the trophy this year for The “Happy Root Beer” 20! You surely won’t be disappointed! I guarantee you that!”