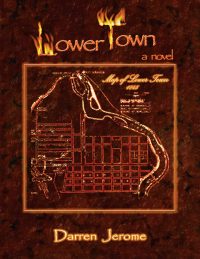 Lowertown is the home of the fictional Brislin family, and the setting for this narrative. At its heart it is the story of two young Irish brothers, Richard and Hugh, and the paths they take which put them on a collision course during the most vicious period of a city’s violent past.

Ottawa was not always the city of ‘peace, order and good government. Beneath its surface still lie hints of the tough little logging settlement of Bytown. Long before Bytown had any notions of becoming the capital of Canada, it was divided into Upper Town and Lower Town: a study in contrasts. Rich, poor. Protestant, Catholic. Prosperous business owners, out-of-work immigrants. English-speaking, French-speaking. The promise of a chance to reinvent and prosper in the new world, contrasted with the reality of hardscrabble toil and prejudices dragged across the Atlantic from the old. Step back in time almost two hundred years, to the new-hewn streets of Lower Town in the time of the Shiners’ War. Let old Bytown come alive through this story of two Irish brothers, who in their hearts, lives, and fates are as different from one another as all the opposing forces around them.