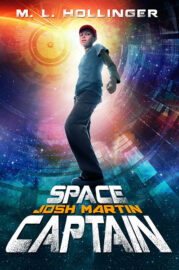 Josh Martin finally manages to get a date with a girl he's been chasing the whole school Year, but his father has won his company's sales contest and the family will go to Walt Disney World instead. Josh must escort his little brother, George, through the park while his parents attend the sales convention functions. While waiting in line at Space Mountain, he is presents with a Mouse Gate pin. Josh and George board the sled, but Josh doesn't notice the cast member pushing a button on the sled. As they start the ride, Josh is suddenly propelled into another dimension. Now begins Josh's Mouse Gate Adventure! M. L. Hollinger is a retired Air Force officer with a vivid imagination. He's been writing since grade school, but only began a serious attempt at novels and short stories after fully retiring in 2001. Science fiction is a natural genre for him, stemming from eleven years' work on the military space program and serving as liaison officer with NASA on the Space Shuttle program.