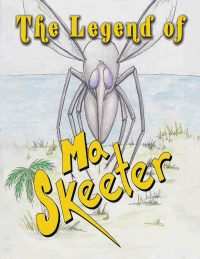 A boy has heard stories of a giant mosquito and travels to the end of the island to meet an old, secluded beachcomber named Captain Whale.

Captain Whale lives in a crumbling shack made of driftwood. As darkness comes, the boy and Captain Whale build a fire on the sand and Captain Whale begins the story. The captain says Ma Skeeter is the mother of all the mosquitos on the island. No one knows where she came from, maybe she was blown in with the last giant storm that covered the island. Captain Whale said Ma Skeeter is so big she blocks the sun when she gets off her nest. He said Ma Skeeter dug all the canals on the island while looking for her lost children. The little mosquitos spend all their time gathering food for Ma Skeeter, he said. And that’s why there are always so many buzzing around trying to light on us. The boy doubted the stories. But Captain Whale told him there are always mysteries and sometimes you just have to have faith to believe. On the return trip down the beach, the tide came in and trapped the boy. Then a giant wind came up and blew the water back out saving the boy. The boy thought he’d seen giant wings flapping the air pushing the water. Saved by faith.. Would anyone believe that story? Yet, the children said it was true. Will you also believe after hearing my story?